Dehydration in the Sahara Desert

Yesterday Marshall (in the white shirt) and the impossible2Possible (i2P) Tunisia team had their first full day running in the Sahara desert. 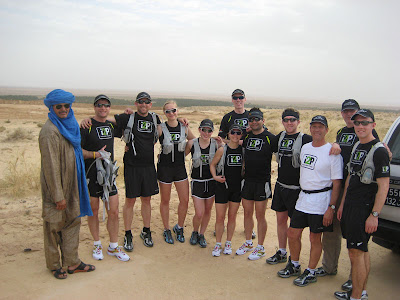 After driving 2.5 hours to the starting point the team hoped to cover 26 miles, a distance that only Andy – but not Jill, Kysha, or Connor – had ever run in a single day before. The first 12 miles was muddy because of a unbelievable lightning/rain storm the previous night.

After a lunch of sandwiches, oranges, dates, and tea presented by local organizer and support coordinator, Mohammed, the team continued during the hottest (over 90 degrees F), most uncomfortable part of the day. Jill almost immediately experienced hydration and nutrition problems, so the team decided to take an easier pace. Still, at about 20 miles, in Ray’s words, “she decided to not only hit the wall, but take it out and allow it to fall on top of her.”

Still, the team finished with a positive attitude as they sang along to authentic Arabic music in the land cruiser they jostled down the road back to camp.

As Ray said, “Jill’s experience today with dehydration really helped us to appreciate the importance of drinking enough water, which has implications not only for completing the trek but makes us realize that people who do not have access to clean drinking water are at a severe disadvantage.”

This entry was posted in Expeditions, Excursions & Other Outdoor Explorations, Hydration & Nutrition. Bookmark the permalink.