Greetings all. Heather here again with a Baffin Island update.

I spoke with Marshall VERY briefly yesterday; just long enough to learn that he and the team were standing beneath Mount Thor. Thor is pure granite, with a 4,100 foot pure vertical drop – the biggest vertical cliff face in the world! Mt. Thor, in Auyuittuq National Park, is probably Canada’s most famous peak. Thor was first climbed in 1953 by an Arctic Institute of North America team. Below is a photo of the Youth Ambassadors with Thor in the background. Obviously the view of Thor is along the path through the Akshayuk valley where the team is trekking. 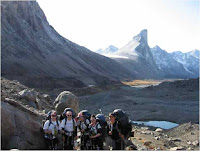 People have been asking me about Baffin. Here’s just a bit of info.

Baffin Island is 183,810 square miles in size: approximately 1,000 miles long and from 130 to 450 miles. Baffin is in the Arctic Ocean, above the arctic circle, just southwest of Greenland. The island is in north-eastern Canada; it’s part of Nunavut Territory (did YOU know this was one of 13 Canadian provinces?). Baffin is the fifth largest island in the world and the easternmost member of the Arctic Archipelago. The island is geographically and geologically a continuation of Labrador, from which it is separated by Hudson Strait. The western side of the island is covered largely by tundra. There are many freshwater lakes, including Nettilling (1,956 sq mi) and Amadjuak, as well as many rivers and glacial runoff streams. In the east, snow-covered mountain ranges rise more than 8,000 feet. The deeply indented coastline has many fjords. Most of the island’s inhabitants are Inuits who live mainly at coastal trading posts, like Qikiqtarjua where the group started, and Pangnirtung where their trek will end.

Ray reported yesterday that, “Highlights of the day included a major river crossing [the Weasel River] where we wore our Crocs and rolled up our shorts to cross the frigid water. It was exhilarating and was a welcome break from the trail.” The team descended about 1,800 feet, which at least brought them into a bit warmer (a balmy 60 degrees Fahrenheit) weather for their crossing. Kathleen reported, “Tonight we sat around and ate dinner under a clear sky while we watched and heard rock fall from the mountain top.” Ray said that car- sized rocks were sliding down the mountainsides into the valley. Reading about this, I couldn’t help but to think of our friend Aron Ralston who was trapped by a rolling boulder in Blue John Canyon, Utah several years ago. While he was trapped, he carved “Geologic time includes now” on the canyon wall. A reminder that we are a part a much bigger system.

Yesterday the team had trekked approximately 50 miles through the valley, with less than 10 miles to go before reaching the village of Pangnirtung. Thus, the team should be done trekking today!

As always, go to the expedition Web site http://www.impossible2possible.com/world/ for more information.

This entry was posted in Expeditions, Excursions & Other Outdoor Explorations. Bookmark the permalink.