The youth reported that the unvarying terrain – small sand dunes with grasses interspersed, flat as a pancake except – as well as the heat, difficult footing, and fatigue from the many miles already covered, made the run difficult… but not impossible. They did see a 2-foot lizard that and a camel spider. Check out the more photos and video at http://impossible2possible.com/tunisia/?s=experience 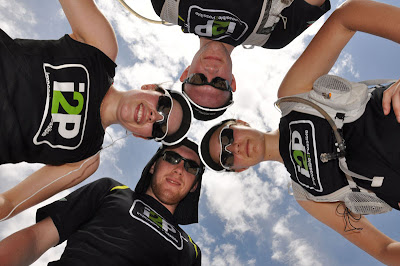 After running 15.5 miles the team had a nice change: lunch of potato and vegetable salad instead of the normal tuna and tomato sandwiches. Because Kajsa’s knee was really bothering her they decided to call it a day. They realized how dirty they are and everyone was looking forward to a shower and a shave – of faces or legs and armpits.

Last Day!
I just heard from Marshall. Today, April 25, 2010, the i2P Tunisia team completed a short celebratory short run near the town of Matmata, a city of underground houses. Matmata is where the bar from Star Wars and the inside of Luke Skywalker’s childhood home were shot, so they’ll be checking that out. The Youth reported that, “It’ll be nice to get a chance to check out the culture of Tunisia rather than just the sand.”

Ray reported that, “As with the Baffin Island expedition, these youth adventurers have inspired not only us, but thousands of students and people around the world. Kath, John, Doc, Marshall, and of course my adopted bro Bob all were here again for this Youth Expedition, and made everything work so well. The participating students and schools- thank you so-o-o much. Without you we have no expedition.”

Thanks, everyone, for following along. Be sure the continue checking out the i2P site for fundraising and educational information and more reports from the team as the spend a few more days in Tunisia.

This entry was posted in Expeditions, Excursions & Other Outdoor Explorations. Bookmark the permalink.